Last week I purchased several dozen cookies for a reception at church. We ended up with about 70 dozen cookies of all kinds which we set out at three stations for hungry attendees of the Christmas program that evening. After donning our fancy embroidered aprons, we stood sentry behind the tables and waited to serve.

Y’all, Baptists can eat. You know that. And perhaps the only thing Baptists like better than casserole is cookies.

Dressed in their finest candy cane scarves and light-up Santa sweaters, about 1000 people stampeded out of the auditorium before the last strains of Jingle Bell Rock even made it to the back row.

They could smell the vanilla and sugar. Or maybe it was our fear. Either way, my 5’4’’ self was soon dwarfed and completely enveloped by Midwestern corn-fed Christians.

To their credit, they stuck to the unwritten “Two Cookie Rule” – at least for the first round. Once it became apparent that most everyone had gotten a moment with the macaroons, they began to circle for their second helping.

One lady leaned over to ask me what the best cookie on the table was.

I thought about asking her how she thought I knew, like I’d sampled them all? It’s cause I’m fat huh?

But Jesus was watching so I smiled and directed her to the peanut butter balls.

Oh, was I quickly corrected.

Apparently these were not balls at all, but buckeyes, a tradition for all self-respecting families north of Little Rock.

Turns out it’s sort of both and neither.

Buckeye candy is a chocolate-dipped peanut butter candy named for their resemblance to the nut from of the Ohio buckeye tree. The tree was supposedly named because the nuts look like buck’s eyes. Gross.

But there’s nothing gross about these candies. They melt in your mouth and are so rich that you can only eat a few which makes them perfect for holiday entertaining.

I sort of used this recipe for my buckeyes (wherein they are called peanut butter balls, neener). 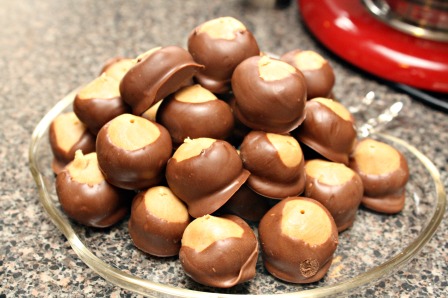 Mix the peanut butter with the butter, salt and vanilla until smooth. I microwaved it all together for about 20 seconds and then gave it a stir.

Slowly add the sugar and mix in until you end up with a thick dough or until the giant gobs you’re stuffing in your mouth begin to taste a little more like sugar than peanut butter. 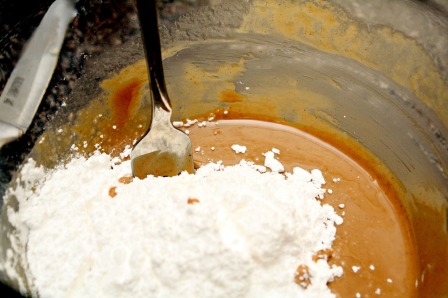 Roll the dough into small balls and place on waxed paper. Refrigerate for at least 30 minutes. 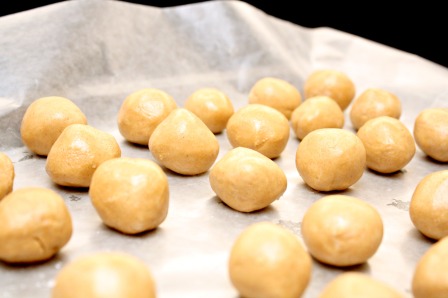 When you’re ready to dip the balls, melt the chocolate and shortening together. You can use a double boiler or the microwave, just be careful to not burn the chocolate.

Stick a toothpick into a peanut butter ball and dip in the chocolate, taking care to leave a small bit of peanut butter uncovered. Place back on the waxed paper to dry.

Once they’ve set, they’re good for nomming. I kept mine in the refrigerator until we ate them all, so I can tell you they’ll keep well in there for about…24 hours.

29 thoughts on “In the Kitchen: Buckeyes”