Sometimes, I only prepare a meal as a means of a cheese delivery system.

This is one of those times.

Sure, there’s some chicken in here, and some spinach so we can call it “healthy.” But let’s be honest. This dish is all about the three cheeses that make every bite a rich, calorie-laden, scrumdiddlyumptious mouthgasm. 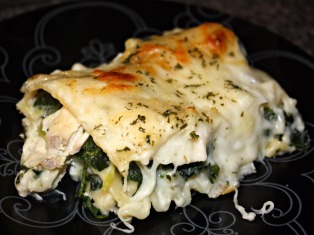 The original, adapted from an old Better Homes cookbook, can take awhile to prep, so I’ve included a few tips on how to make this a little easier at the bottom.

*I usually make my own broth when I’m boiling the chicken because it’s less salty than the store bought cartons. Since I had some left over after the dish I just poured it into ice cube trays, froze it and then popped it into bags to store.

Preheat the oven to 350. Boil, drain and rinse the noodles. 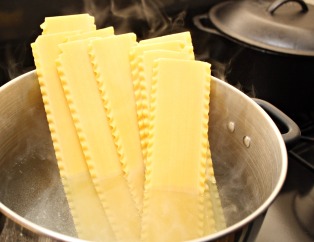 Melt the butter in a large saucepan over medium heat. Cook the onion and garlic in the butter until tender, stirring frequently. Stir in the flour and salt, and simmer until bubbly.

Mix in the broth and milk, and boil, stirring constantly, for about a minute. Stir in half the mozzarella and parmesan. Season with the basil, oregano, and ground black pepper. Remove from heat, and set aside.

Spread a little of the sauce mixture in the bottom of a 9×13 inch baking dish. Layer with 3 of the noodles, half the ricotta, half of the chicken, and half of the spinach. Pour about 1/3 of the sauce over the top.

Arrange 3 more of the noodles over the chicken, and layer with the rest of the ricotta, chicken and spinach. Pour another 1/3 of the sauce over the top.

Place the last three noodles over that, pour on the rest of the sauce, and sprinkle with the remaining cheese. Top with the parsely.

Bake 35 to 40 minutes in the preheated oven until the cheese is browned and bubbly. Let it rest for several minutes on the countertop to set.

To make this easier: Buy a rotisserie chicken from the deli. Use a jarred sauce.

To make this meatless: Skip the chicken and replace with sliced mushrooms. No need to sauté them first. Just layer them in.

29 thoughts on “In the Kitchen: Cheesy Chicken & Spinach Lasagna”