I gotta tell you, the last thing this mama wanted to do tonight was go trick or treating. I was barely getting by on the three hours of sleep I’d gotten after last night’s Madonna concert and still being waterboarded by my own snot thanks to this lingering cold.

For some reason, my husband was determined that we go, so after a short nap I dragged myself out to the truck to head over to our friends’ neighborhood for what ended up being probably one of the best Halloween evenings ever.

Last year, Monkey dressed as a gnome and rode around in the wagon for most of the night. His dad would carry him up to each house for treats and he’d just stare at all the happy, friendly candy pushers.

This year, he quickly figured out what an awesome deal this whole Halloween thing was.

You mean, I just wear some silly outfit? 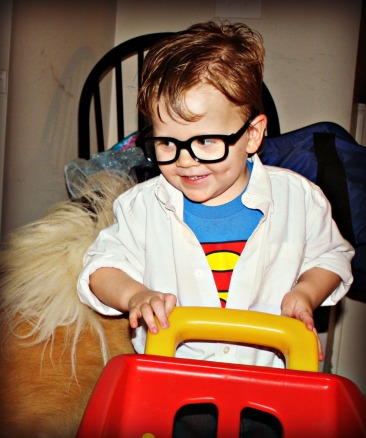 And I get to pull the wagon around in the street? 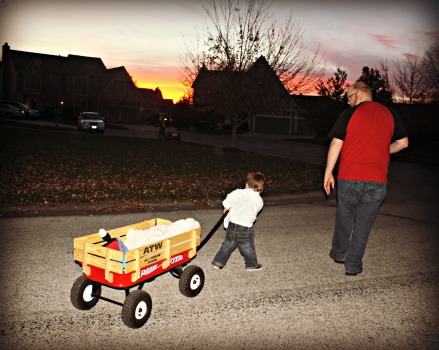 And if I walk up to a house and yell, “Chick O Cheat” they’ll give me candy? (Don’t forget to say thank you! See you later!) 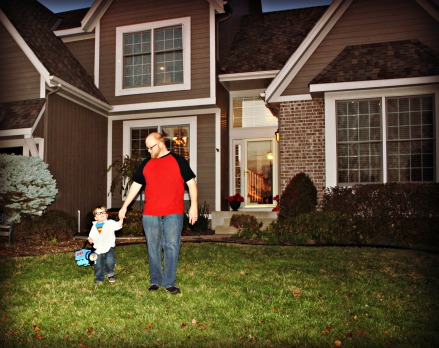 And Mama will let me eat my weight in M&Ms as long as I turn over all these orange square things? 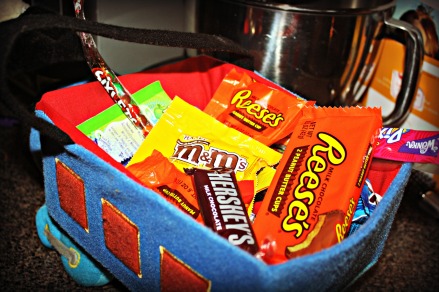 So up and down the sidewalks we went through a neighborhood full of clowns and witches, fairy princesses and well-muscled super heroes. The dads toted small coolers full of autumnal brews while the big kids filled pillowcases with sugar-laden treats to be bartered for extended bedtimes later.

The moms wheeled the smaller kids around in wagons and strollers, stashing the good chocolate in their pockets when no one was looking. Ok, so maybe just one mom did that. Shut up.

After we’d filled the buckets and baskets, we headed back to our friends’ house for some pizza and warmth while the kids sorted their candy and the men chilled on the porch with their drinks and cigars.

On the way home, Monkey was asleep before we hit the highway. His father slipped him quietly into pajamas and under the covers before stretching out to gently snore on the couch.

And Mama is tired, and still feeling under the weather. But she is also round and content and grateful to be able to live such a beautiful, simple life with some truly excellent people.